Contributing to a Long Night of Optics

Rathenow is a small town West of Berlin, in the heart of the Havelland, one of the protected regions in Brandenburg.

Rathenow has been called the Town of Optics, since one of its citizens was given the royal privilege of creating an “optical industrial establishment” in 1801. By 1896, 193 optical companies were operational.

The Long Night of Optics on June 6th will bring together 19 companies in the Centre of Culture, which will be connected via an “optical mile” with the Optics Park. The complete programme of activities can be viewed on this flyer in German.

3D Metrics will have a stand next to Askania, the local producer of microscopes, where we’ll show how our “software glasses” can be fitted to microscopic pictures.

A telescopic picture of the moon was derived from a historic telescope that can be visited in the Optics Park. It has been re-visualized by our software as follows: 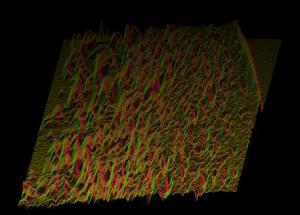 One of the possible re-visualizations

I'm a mathematician and system analyst formerly at CERN in Geneva and became an event organiser, software designer, independent web publisher and online promoter of Open Justice. My most significant scientific contribution is now a solution to the Prime Number problem: https://primenumbers.store/
View all posts by Sabine Kurjo McNeill →
This entry was posted in Optics Fair. Bookmark the permalink.